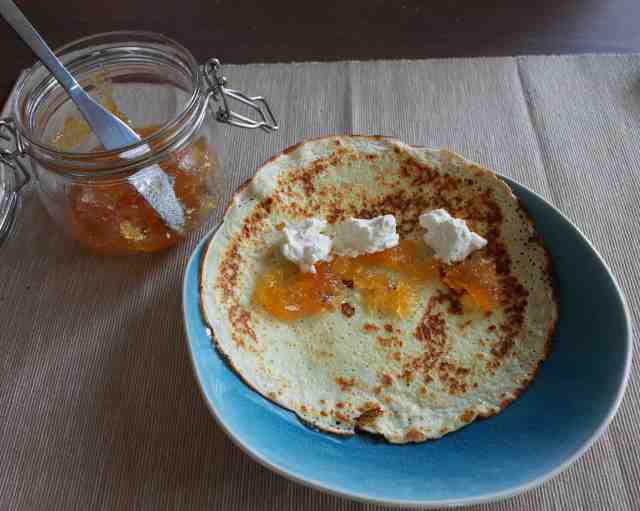 Our overachieving lemon tree is producing lots and lots of delicious lemons. Thankfully, the squirrel seems to prefer the neighbor’s smaller mandarins to our lemons so the humans get to enjoy the entire harvest 🙂 I was a little worried during the ‘slow growth’ season here in CA, but the squirrel ended up settling for our bird seeds instead…I got to watch the little jerk hoping around our yard and sniffing everything!!!

I am still feeling a little overwhelmed by the supply of lemons and have to come up with more recipes to use the remaining ones so that the lemon tree can get ready for the next season! I did make two jars of preserved lemons that should be ready for testing soon. For now, here is a recipe for some really tasty lemon marmalade. I was skeptical at first thinking it will end up too sour, but it is actually pretty delicious and the lemon taste is not overwhelming at all. I browsed lots of recipes since most use the sweeter Meyer lemons, and I eventually settled for a variation of this simple recipe.

Wash your lemons really well especially if they are store bought and waxy. you will end up eating the peels in the marmalade! 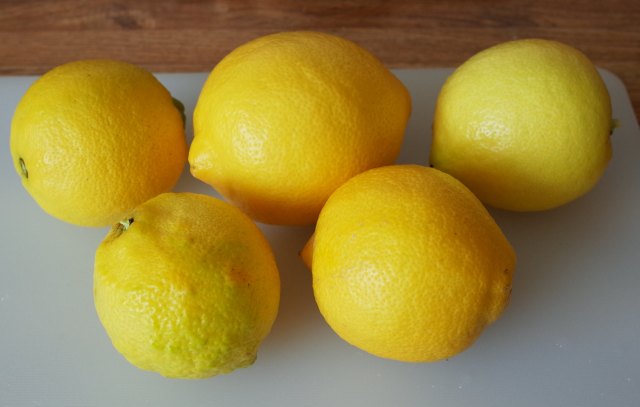 Peel the lemons and cut the peels into very thin strips. 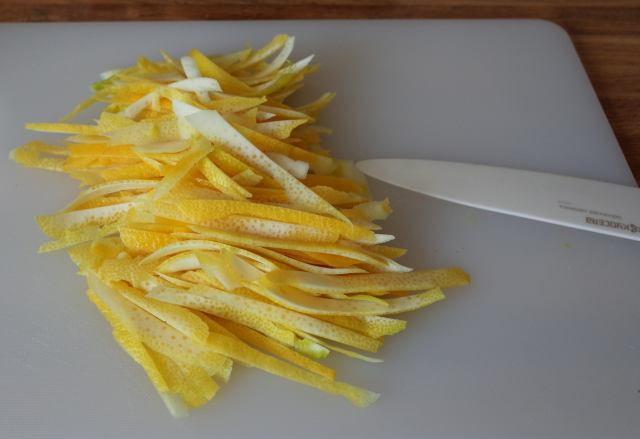 Peel off the white membrane from the lemons. Save some of the membranes. 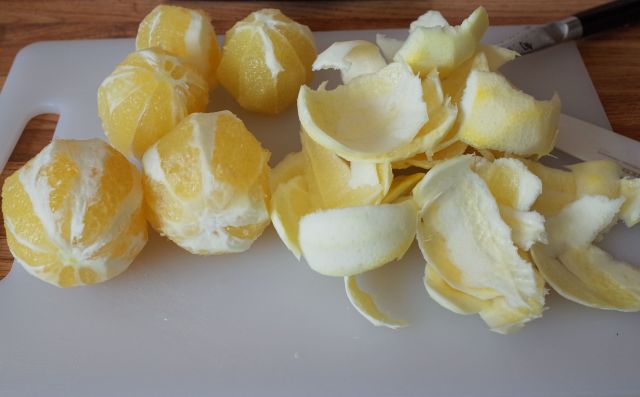 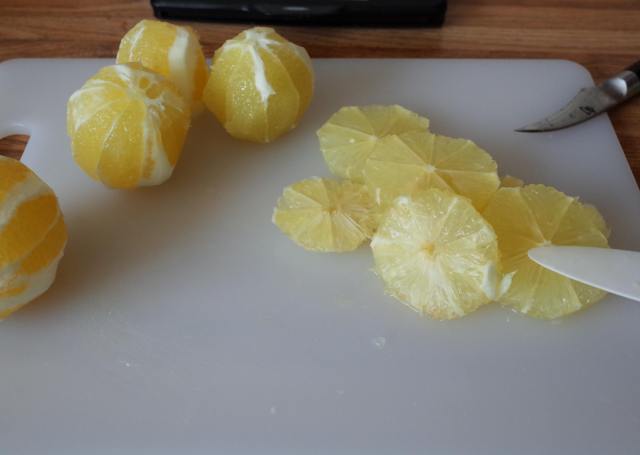 Chop some of the membranes and place them with a few seeds in a cheesecloth (they contain pectin which will help thicken the marmalade). Combine lemons, lemon peel, and water in a pot. Add the membrane pouch. 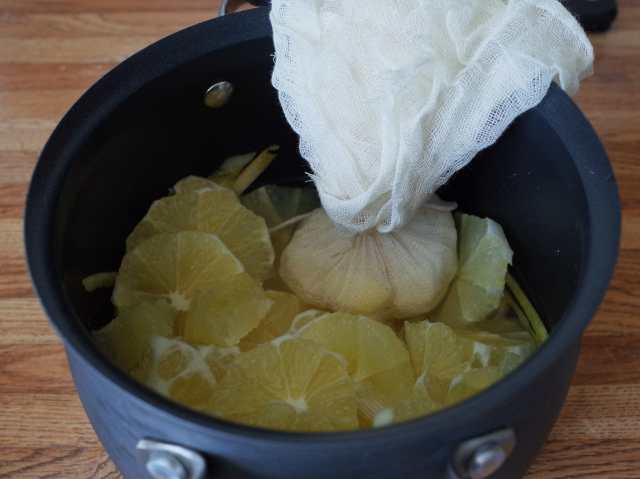 Cover and refrigerate mixture for about 4 hours. 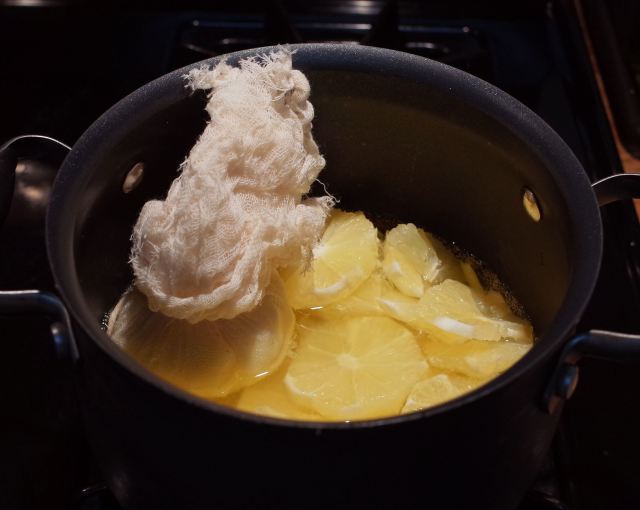 Add salt, bring mixture to boiling, then reduce to simmer and cook until the peel strips soften (45 min – 1 hr). 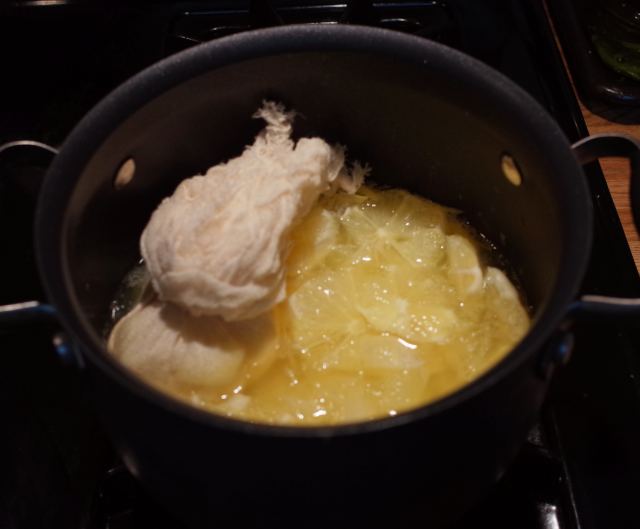 Add 2 cups of sugar, increase heat and stir until sugar dissolves. Reduce heat to simmer again and continue cooking until the mixture reaches 220 F. Stir often! This will take a while, close to another hour. I was tempted to speed it up by using my chemistry knowledge and adding more sugar 🙂 You’re pretty much waiting for water to evaporate and reach the right sugar concentration that will elevate the boiling point of water to 220 F…in case you are curious 😉

If you do not have a thermometer, you could also test the marmalade using a pre-chilled plate. Drop some marmalade onto the plate, draw a line with your finger and if the line doesn’t fill in right away, the marmalade is thick enough!

Meanwhile, you can sterilize some pint jars. I boiled mine in water for about 15 minutes. I store mine in the fridge, but you want to be extra careful about sterilizing especially if you want to store the marmalade at room temperature. 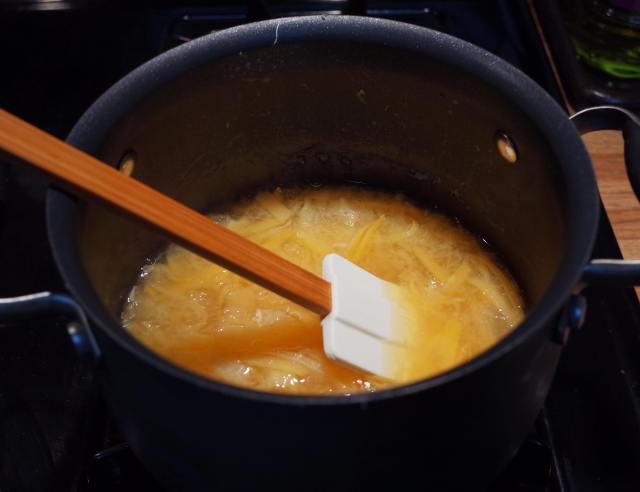 lemon marmalade ready to can!

Adjust sugar if needed. I added an extra quarter cup. Place the hot marmalade in the hot jars, and seal! I ended up with one pint jar and a bit extra. The pint jar is blue, so it looks a little weird. Don’t forget to date the jar 😉 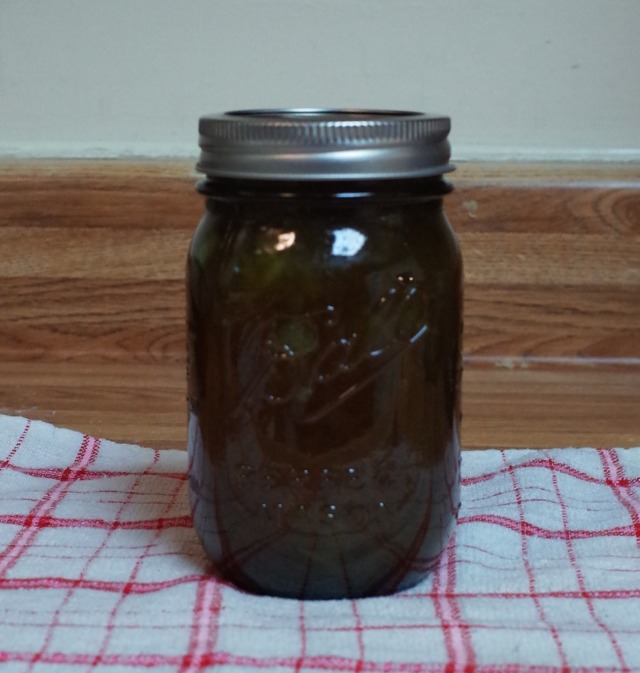 If you get extra like I did, store it in a jar in the fridge. 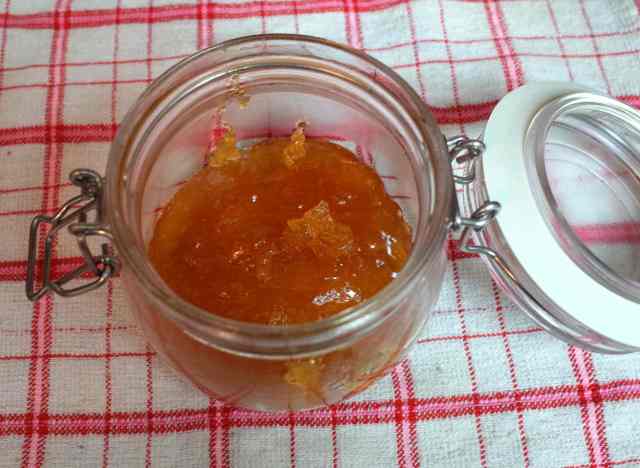 Serve on bread, or like I did on crepes with some maple syrup whipped cream…yummy! 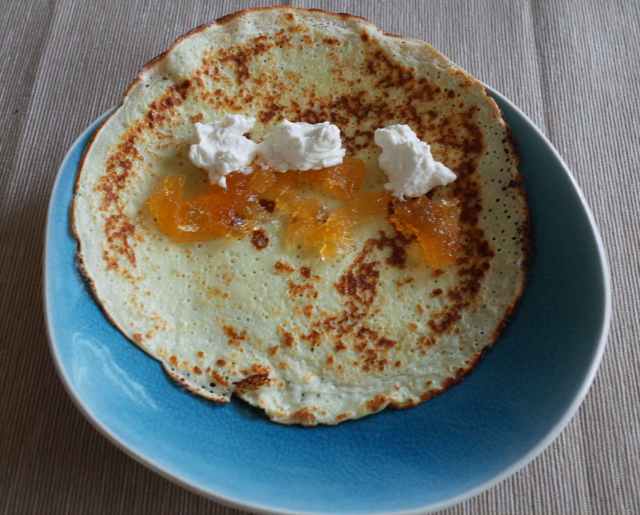 This turned out better than expected. I may end up making more since the lemon tree is begging to be picked. I am debating a ginger or vanilla variation. If you’re not desperate to use as many lemons as possible, you can use a mix of lemons and other citrus such as tangerines, kumquats, etc.

Hope you’ll give it a try 😉

This entry was posted in Cooking and tagged citrus, jam, lemon, marmalade. Bookmark the permalink.